Antiquaresoffers to value your antique majolica.
We are members of the AAI, Italian Antiquarian Association, and we have been operating with passion in this sector for over fifteen years.
If you have antique majolica that you would like us to evaluate please do not hesitate to contact us at the following phone number: 392 6587032, or send us photographs to the following email address: antiquares@virgilio.it, please be sure to include any information you might have about the object. You can also fill in the appropriate form
We remain at your disposal for any clarifications, guaranteeing maximum discretion and trustworthiness.

Majolica is characterized by a porous ceramic body that is often coated with a tin based enamel. It was originally used to make objects that adorned the homes of the rich, such as carafes, plates, and colored containers of various kinds.
Majolica was widespread in the Mediterranean with it’s hot climate and dry earth. The markets in Majorca were the first to sell these artifacts, which had a rather elaborate and typical style.
Through the centuries this style underwent various evolutions. The techniques learned during the Renaissance and the export of Chinese artifacts contributed to the change in taste.
In France, majolica was called “faïence” in honor of Faenza, one of the most productive Italian cities. Faenza was a City-state, run by the Della Rovere family. The most productive shop in Faenza was that of Count Fermiani.

The Italian production of Majolica was not only limited to Faenza: both along the Arno river in Tuscany and the Tiber, other centers of production developed. Important was the majolica from Deruta that bloomed in the 1600s, but also that of other Umbrian towns such as GualdoTadino and Gubbio, well known for their production of majolica that was both prized and very colorful, finished with varnishes that were similar to ruby and gold.
In Tuscany notorious was the majolica from Sesto Fiorentino, Florence and MontelupoFiorentino, where the artisans, with their taste and flair, found fertile ground to produce (and export) majolica. Some of these pieces are exhibited in the Metropolitan Museum of Art in London. 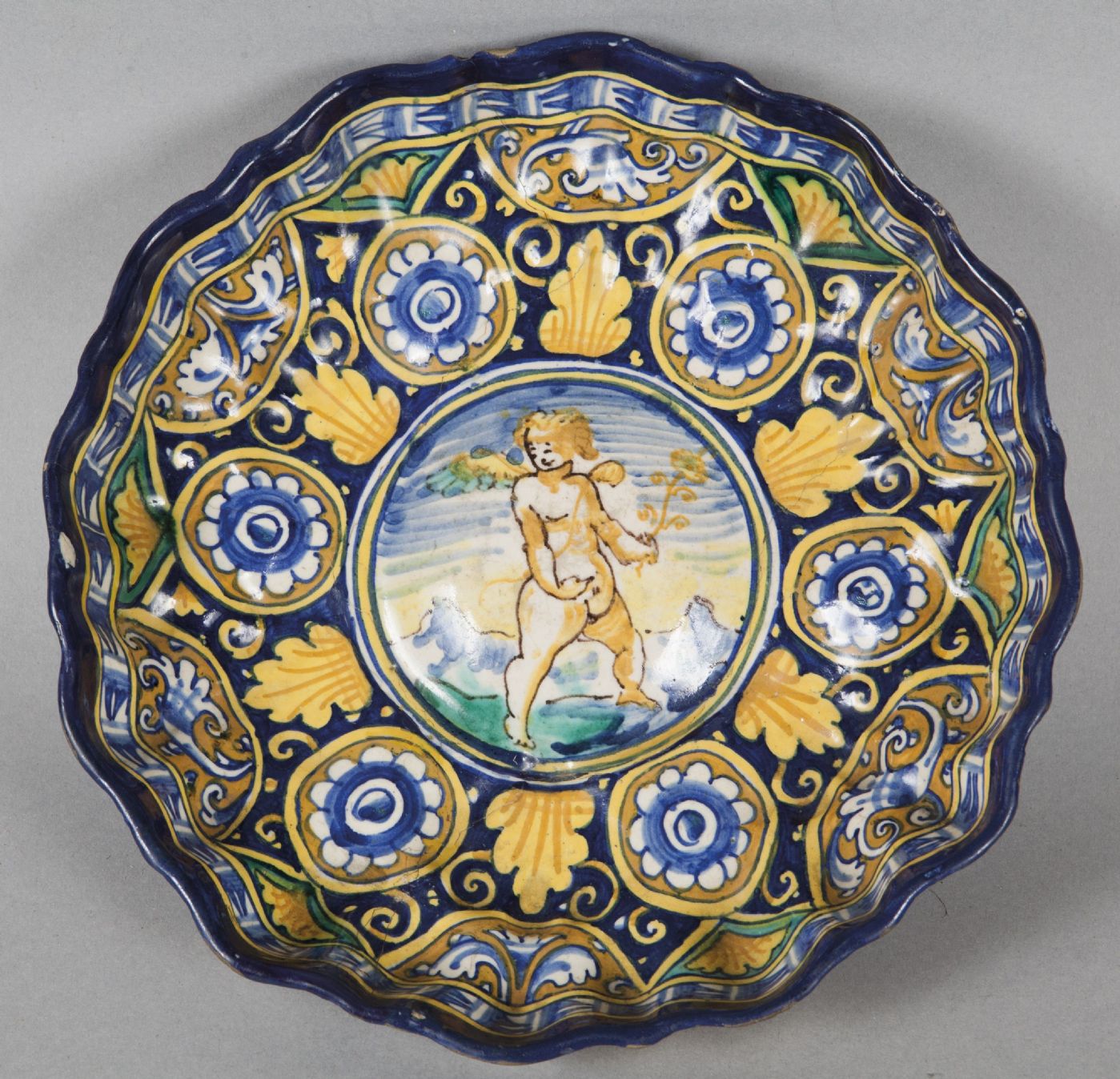 Analysis and brief history of Majolica

Although the first terracotta pieces are from Prehistoric times, it is generally considered that the first ceramics were of Eastern provenance. Initially vases were hand made. Only later was the potter’s wheel invented: initially it was rather rudimentary, with evolution it would later be operated with a pedal that was maneuvered directly by the artisan. A few thousand years before Christ, the basics of pottery making were known: but if on one side the procedure of cooking it in the oven was common knowledge, on the other, unknown were the decorating and the waterproofing. In ancient times they already knew the technique named engobing, by which the object was covered by a thin layer of earth that consented it’s carving. The technique of glazing was first born in Mesopotamia.

How Majolica was born

The term majolica designates all those ceramic artifacts that are subjected to a tin glazing process. In Medieval times Majorca became the most important port of the Mediterranean. Many artifacts from the Island, which was still under Islamic influence, arrived on the Italian coast.
The Islamic people had discovered a new technique: glazing, which consisted in covering artifacts made out of precious ceramic in a layer of glass, which made them water resistant, shiny nearly metallic. These ceramics known as majolica were brought to Italy where they influenced our production. Local artisans in fact modified their production to follow what was coming from the Balearic Islands.
Starting from the 1300s, in Italy, ceramics using tin oxide that allowed for a white opaque background started to be more available. As time went by the techniques became more and more elaborate as well as the clays that were filtered and purified. The modeling of the clay was done using a pottery wheel.
After an initial drying process, the artifacts are cooked for a first time in an oven, then painted with the tin glaze, then cooked a second time at a temperature of 800°/900°.
At the end of this process Majolica is born. Majolica artifacts are also known for their colors. Intially the variety of colors was limited, since not all colors resisted the heat of the oven.
In fact the only colors that existed were copper green and manganese brown.
Only later were “ferraccia yellow” and cobalt blue introduced.
In the fourteen hundreds, in some places in central Italy, the “zaffera relief” technique was born to define blue brushstrokes on the glazed surface.
Cobalt blue since then became prominent in ceramic coloring thanks to it’s resistance to high temperatures up to 1200°.